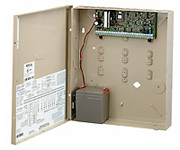 When the battery that powers a house alarm begins to lose its ability to function, a warning will normally display on the front panel of the alarm. Typically, the message will indicate that a technician needs to be contacted in order to replace the battery. However, calling a technician can be expensive, when the work is quite simple. By following these steps, replacing a house alarm battery can be done within minutes.

Locate the battery within the alarm system by removing the front panel door. The battery will be installed with two cables hooked into the alarm.

Normally, when a home alarm system is installed, a technician will leave the homeowner an engineer’s code to disable the alarm when needed. This code should be entered into the system prior to disconnecting the battery to avoid tripping the alarm. Unfortunately, without this code, removal of the battery will cause the alarm to sound. If this code is not accessible, cover the speaker of the alarm to weaken the noise while removing the battery. It is important to muffle the sound as best as possible as most alarm sound louder than 100 decibels and could cause serious damage to human eardrums if too close for longer than a few minutes.

Once the cables have been removed, unplug the power supply to the main panel. This will keep the alarm from running electricity through the cables and possibly causing electrocution.

Install the new battery into the compartment inside the panel. Reattach the cables to the battery just as they were removed. Plug the power supply to the main panel. On most alarm models, the alarm will continue to sound with the engineer’s code being entered. A message may appear that warns “Open Zone” or “Tamper”. If the engineer’s code was entered prior to the battery removal, the alarm will not continue to sound.

Always refer to the owner’s manual to research the battery information prior to replacing.